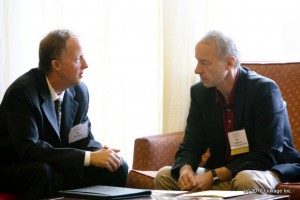 Dr. Steven Nickoloff has expanded upon his experience as a psychiatrist and now also helps executives in professional settings.

Businesspeople wishing to enhance their professional functioning or address problems in their corporate life have a diverse group of “coaches” from which to choose. These range from those with primarily business, HR or similar training, to those from a clinical (psychiatric or psychological) background. Which to choose depends on the nature of one’s difficulties and what one hopes to accomplish.

Dr. Nickoloff’s work with executives focuses on those who recognize that their professional functioning and advancement are impaired primarily by problems of a psychological and/or relationship nature.  Common issues include conflicts over success and ambition, self-sabotaging, recurring conflicts with co-workers, and presenting oneself in a counterproductive way.  Coaching combines elements of psychotherapy, such as understanding one’s personality and motivations and recognizing recurring patterns of interaction, with practical strategies of management and understanding the psychology and motivations of co-workers and subordinates.  Considering the particular “corporate culture” in which the executive functions is also crucial.  In his practice, Executive Coaching and Psychotherapy can look similar at times; the difference has to do with the greater relative attention given to external issues and practical management and interpersonal strategies in Coaching.  Sometimes Individual Therapy morphs over time into Executive Coaching, and vice versa.  Psychological testing is sometimes utilized.

Sometimes consultation with a work group is advantageous; more information can be found on the Consulting tab.